This morning I gave an input on BBC breakfast in relation to a campaign to reduce class sizes by Dr Helen Vickers. 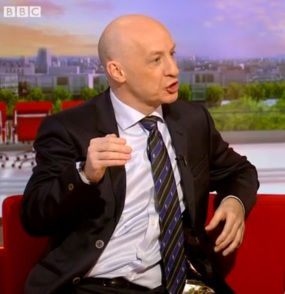 Prior to my input I have pulled together some thoughts on class size and the impact on children and teachers.

But what does the research say?

Inevitably the data is mixed:

One reason for this is drawing inappropriate causal associations. So far example one problem is that if a school puts lower ability pupils in smaller classes and reports the outcomes then the outcomes would illustrate that lower group sizes equates to lower attainment (given the ability and starting point of the group). So looking at group size and outcomes is not enough.

However research by Denny and Oppedisano (2013) did counterintuitively find that using a large representative sample of high school students in the United States and the United Kingdom, that students do better on mathematics tests if the classes are larger. In this study it was however acknowledged that the influence of parents as a variable is significant and as is known in the UK the investment by parents in private tutors might be masking some of the impact of class sizes!

The Education Endowment Foundation in their summary states: “overall the evidence does not show particularly large or clear effects, until class size is reduced to under 20 or even below 15.” As such reducing a class from 30 to 25 might not have a significant impact on attainment but there may be other associated benefits such as improved teacher workload and  wellbeing or improved diagnostic of pupils learning needs.

An often cited research study – Project Star in Tennessee identified however that even a temporary reduction of class size (e.g. for a number of years) resulted in long term learning gains when classes were reduced to 15 from 25 with the biggest impact upon boys from disadvantaged backgrounds. However to have an effect  of some significance the class size must be lower than 30 and other variables have to be addressed such as the quality of teaching and the nature of teaching, learning and assessment.

Interestingly a caveat that is mentioned in the EFF summary and other research indicates that reducing the class size alone is not enough as the reduction, if it is to have an effect, should be matched with an appropriate change in pedagogical strategies. Therefore teachers in countries such as China, with an average class size of approximately 55 pupils, will equally have adapted their teaching styles accordingly (hence why we should be cautious in borrowing policies and practices from other countries).

Perhaps a significant concern is if class sizes increase – who are the increased class size most likely to impact upon? From the different studies including EEF it is noted that ‘slightly larger effects are documented for the lower achievers and those from the lower socio-economic status for very young pupils.’

Equally whilst there may be some drop in attainment as class sizes increase– financially in terms of reducing class sizes the costs may be too high for limited gains in attainment. Therefore other approaches may be considered as providing more  cost effective and efficient ways to raise attainment than reducing class sizes e.g. through a focus on metacognition or feedback. There is also suggestion that in larger class sizes pupils are afforded greater autonomy and accountability for their own learning (I suspect some may not find this convincing).

Ultimately class size is just one key factor in impacting upon attainment and a more nuanced understanding of the factors involved need to be considered particularly in relation to the pupil and teachers needs.

In terms of comparisons, the Organisation for Economic Co-operation and Development (OECD) indicates that the average for lower secondary is 23 pupils with Primary pupils in most countries having a lower average than Secondary. 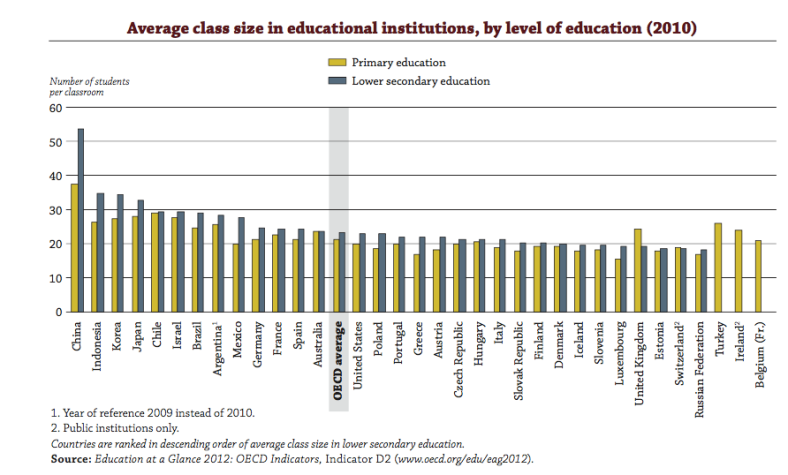 In the UK unusually the Primary class average is higher than Secondary at approximately 25. It has to be remembered that these are reported averages and are not necessarily actual ratios (as typically it is the number of pupils divided by the FTE of teachers (who may not all teach)). Also it is worth noting that the UK primary school ratio is higher than many other countries e.g. US and most of Europe, whilst the secondary ratio is one of the lowest in the world.

As indicated a more nuanced understanding is still required as within a classroom it will be the quality of teaching that will be a significant factor and the adapting of teaching to the environment and the effective use of resources, including additional support teachers that will ultimately impact upon the learning.

Whilst the research is unclear as to what the optimum class size should be, given the complex number of variables associated with learning there are two factors that will remain pertinent:

Firstly class size is an indication of expenditure by governments  (and delegated decision making to Academy Chains, MATs and Free Schools) on their teaching workforce. This would also be related to teachers salaries, the amount of hours worked and the qualities (including the training) of the teacher. So questions such as ‘should teachers with larger classes be paid more’ are questions that are now delegated out to schools.

Secondly reducing class sizes alone will not necessarily have an impact on improved attainment – but attainment is not the only factor we should be concerned with. However where class size reductions take place they have to be matched by appropriate changes in  pedagogy in order to reap the benefits.

Without doubt however, an increasing worldwide demand for teachers combined with a ‘recruitment crisis’ and growth in the population is going to increase pressure on class sizes for at least the next 10 years!